I just can’t be without some knitting project.  I am addicted to yarn and sticks.  After finishing the last project, I couldn’t bring myself to work on the Bacardi Cardi just yet.  Concentration is needed for the color charts and all those yarns hanging off the sides.

My plan is to knit a top-down, circular yoke, seamless sweater.  For.  Me.  Like this: 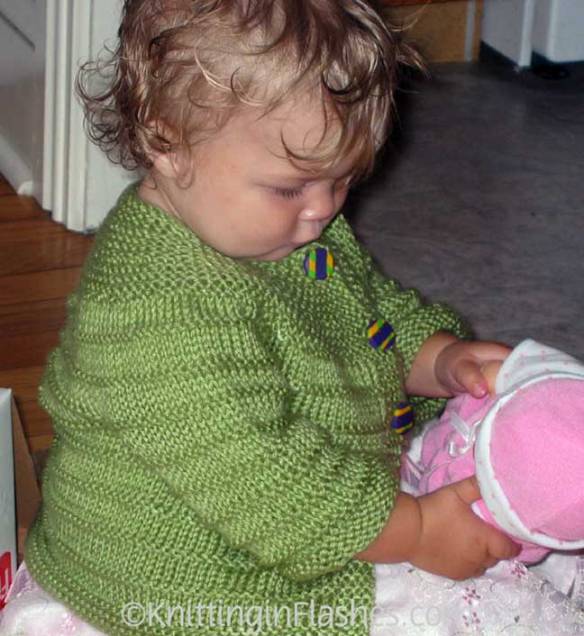 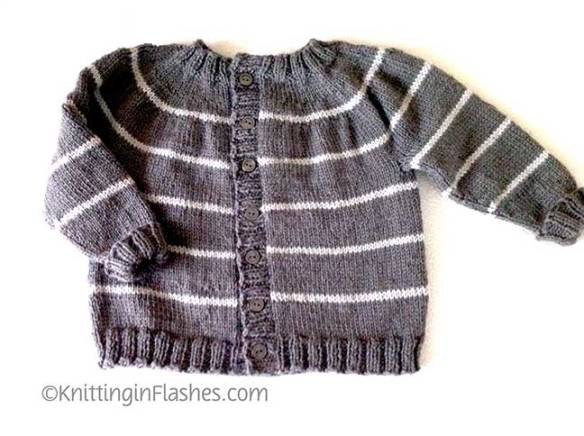 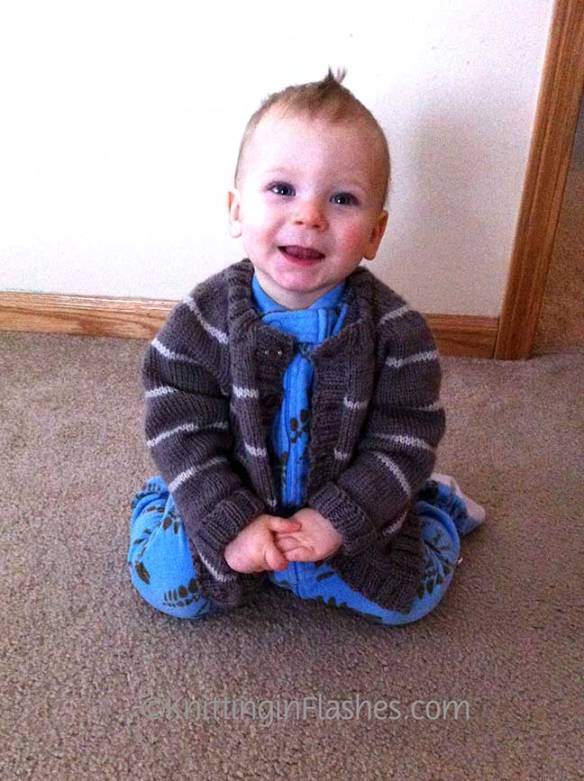 Using these two colors of yarn that were…wait for it… 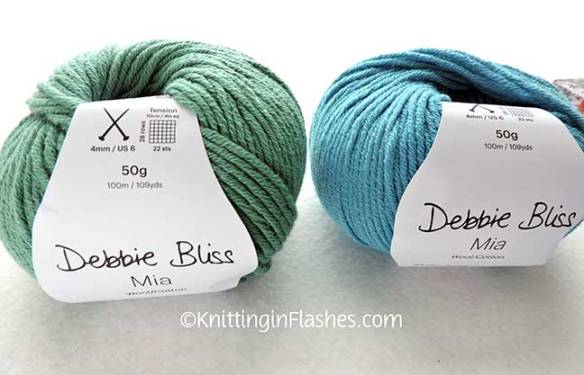 I searched and searched the interwebs and Ravelry for a simple top-down circular, seamless adult-sized sweater.  I found the Knitting Fiend Yoke-u-lator and plugged in my numbers.  Voila!  A simple pattern for the math. 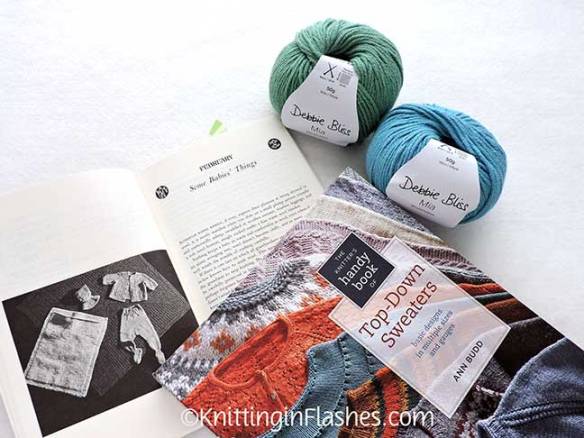 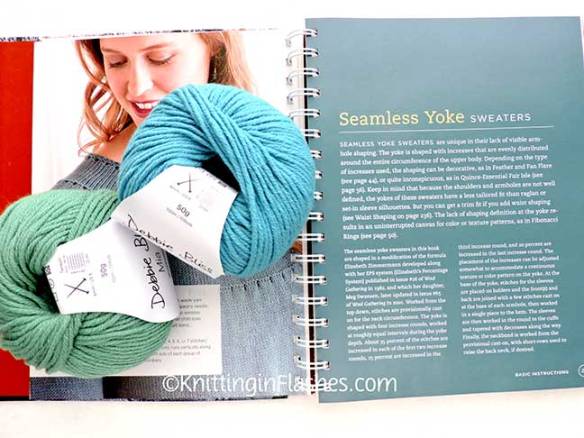 …and the February Baby Sweater on Two Needles from Elizabeth Zimmermann’s Knitters Almanac because I need more detailed instructions. 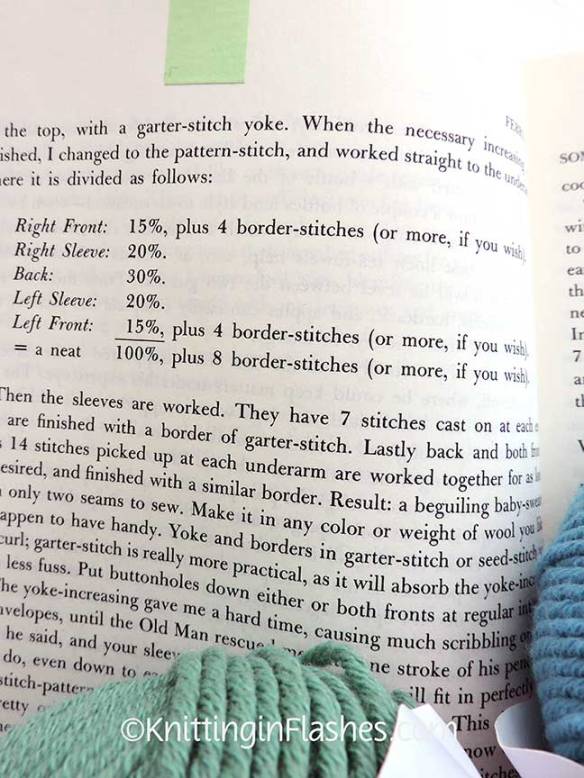 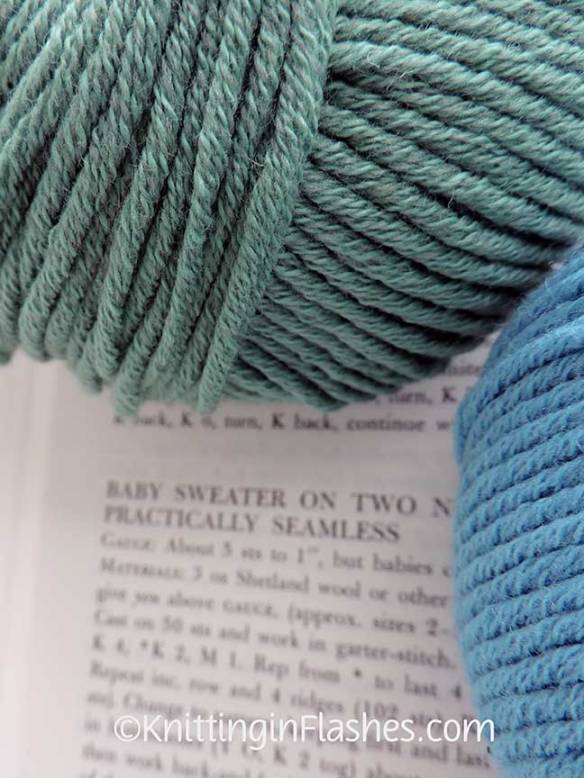 I couldn’t gift an item that was sub par so I removed one button/snap band, lined up the ridges and snaps and sewed it back on. 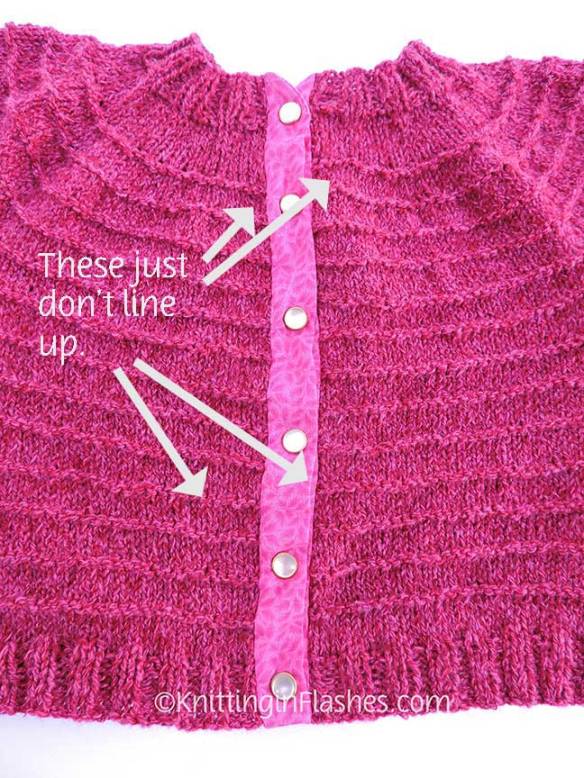 I feel better even though I’m sure the Birthday Girl didn’t care.  I did. 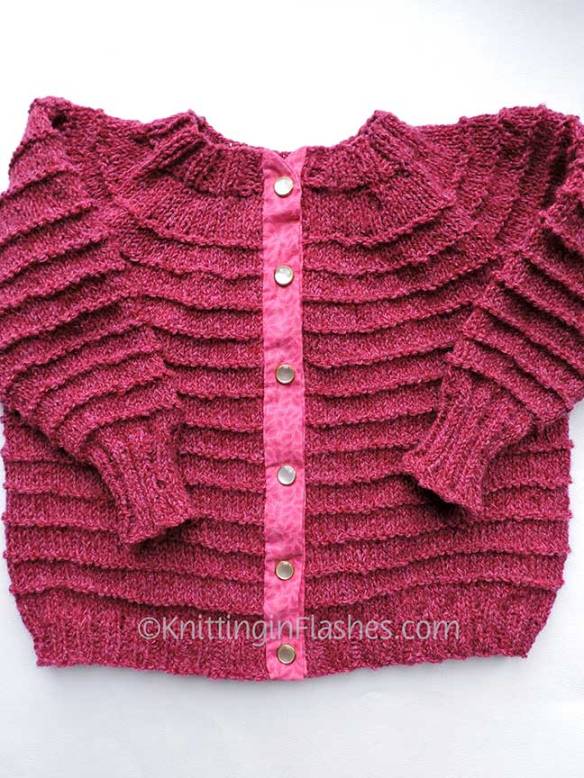 The color is hard to capture on camera but the above picture is pretty close to the actual color. I try to include a care tag and a bit of extra yarn with all my gifted items.  It also shows how many stitches are in the item.  The gifts weren’t opened before we left so no pictures of the model and sweater. 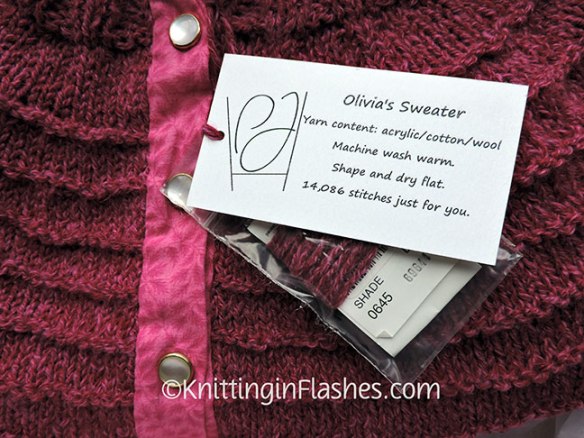 Other than a couple of pairs of baby booties, I had not knit anything for our grandson, who turned one year old last month.

I knit sweaters for his twin sisters for Christmas 2013 and had enough yarn left over to knit a sweater for him. 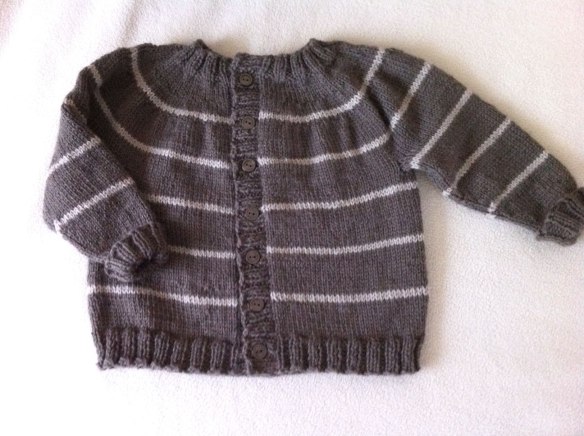 I used Elizabeth Zimmerman’s February baby sweater on two needles but tweaked the pattern a bit by increasing the beginning stitch count to 70 stitches.

I also added buttons and button band down the the entire front and ribbing at the cuff.   \

Okay, so maybe I just used her outline for the increases at the top of her sweater to make this top-down raglan sleeved sweater.

Is this sweater different enough that I can post the pattern?

I used two entire hanks of the Pewter and  part of a hank of the Linen.  I knit the sleeves until I ran out of yarn making the ribbing extra long so the cuff can be folded back or not.

The buttons are almost a perfect match.  Not that they need to match.  I preferred less contrast so the stripes would be stand out more. 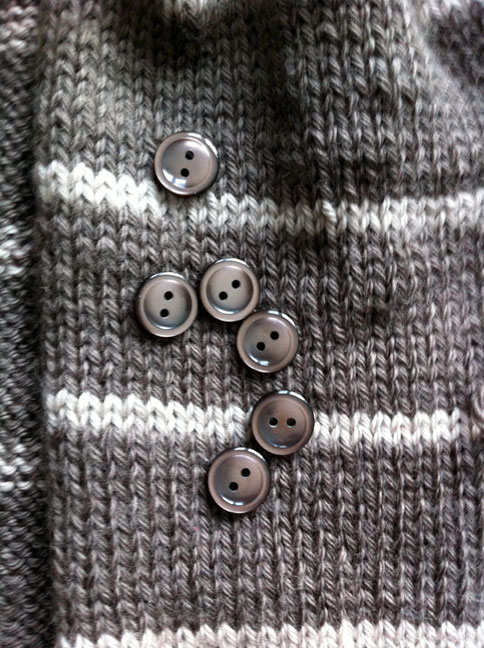 I added satin ribbon to the button side to give the button band more stability. 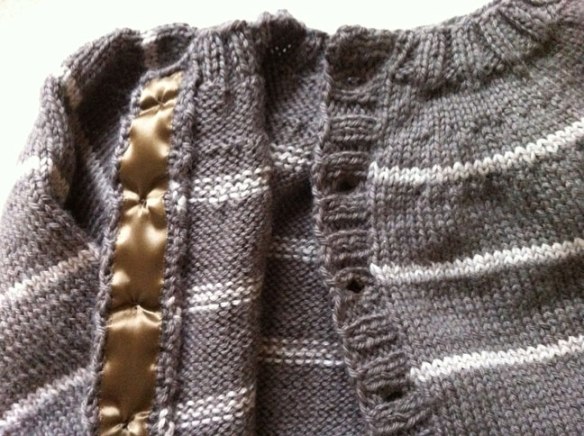 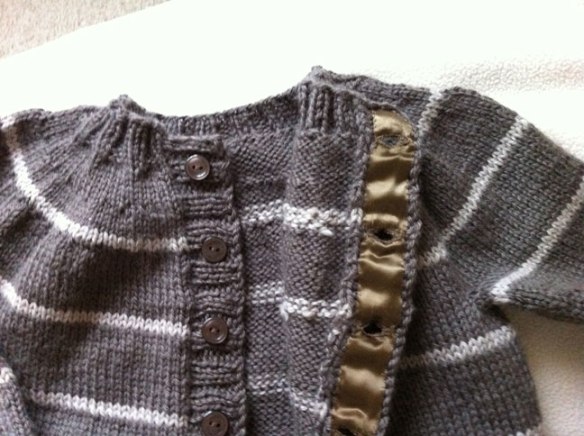 Of course I had to show the model. 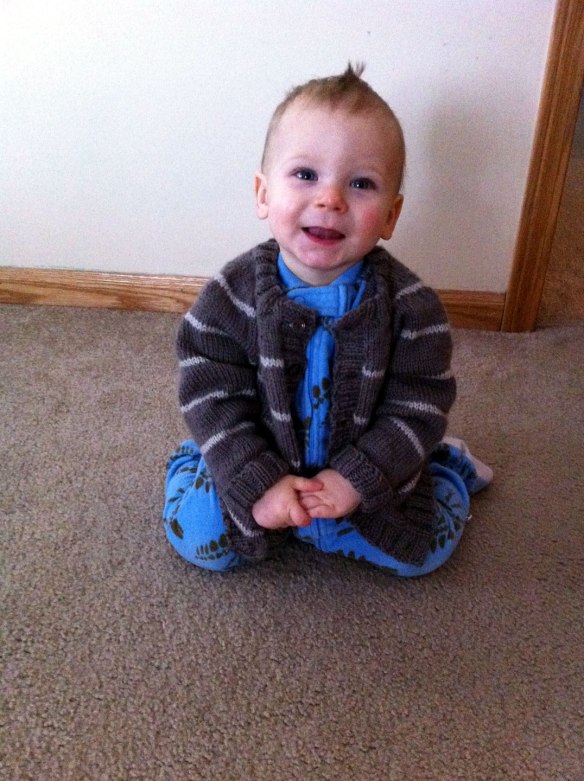 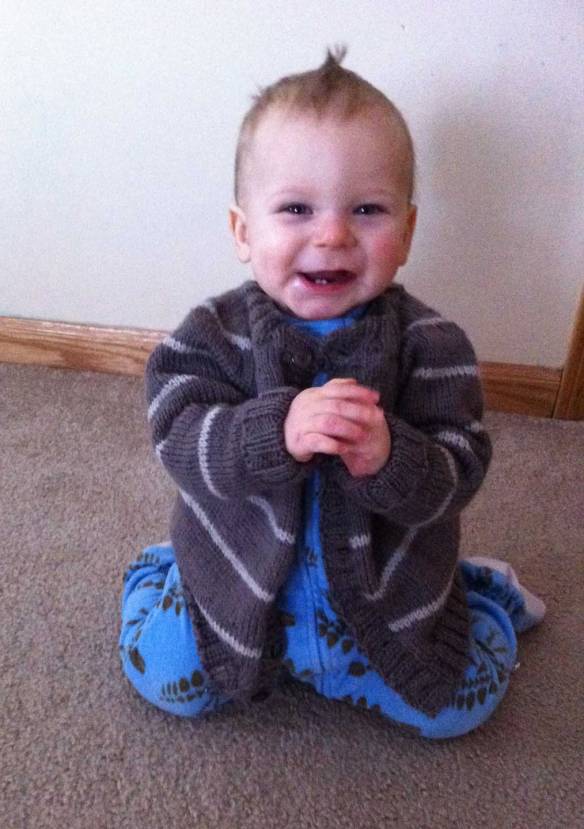 Friday evening I finished the February Sweater on Two-Needles from Elizabeth Zimmermann’s Knitting Almanac.   The light spots are the reflection from the sun. 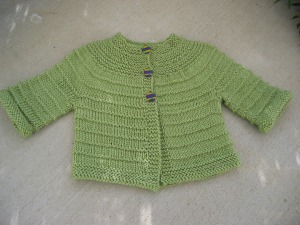 I couldn’t find buttons that I liked so I ended up making some out of polymer clay.  Only my second attempt but they worked.  I need to play with the clay more so I can get some buttons made ahead of time and not at the last minute…like I did this time.

The sweater fit my granddaughter!  I was so afraid it would be too small.  These photos were taken at the birthday party after the cake.  Jayne’s hair style courtesy of some icing mousse. 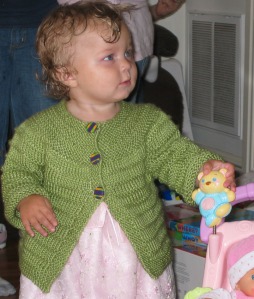 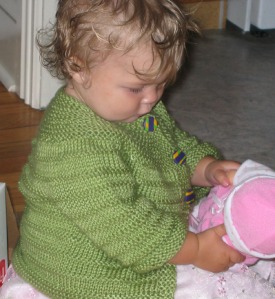 I used US 8 needles and worsted weight yarn (Caron Simply Soft).  (I know EZ would be unhappy with me for not using wool.)  I knit the sleeves on dpns (double point needles) to eliminate seaming the sleeve.  I did have trouble joining the yarn as I had a gap where the body and sleeves met.  I’d really like to know how others do this.  I’m not happy with the join but it worked.

I went over to Ravelry and checked to see if others had trouble with this pattern, particularly the sleeve join.  Some people were very upset when one questioned the pattern.  I knew the pattern was vague and allowed for individuality but coming down one someone for not liking the pattern and lack of direction was just nasty.