For your information I was not too enamored with history while I was in school until I had two wonderful professors in college.

Dr. Collins taught Art History at WVU in the early-mid 1970s and I was fortunate to have him as one of my instructors.  Our class was in an interior room of the Creative Arts Center which was cool and dark, just perfect for showing slides of art works.  Along with the cool, darkness, Dr. Collins’ soothing voice allowed some students to think that was the perfect opportunity for a mid-afternoon nap.  But not me.  Instead of just mentioning the painter or sculptor and the name of the art work, he also included some tidbit of information about the artist, obvious as well as not so obvious details about the work, the political and religious atmosphere of the times, and the reactions of the world to each piece.  His dry sense of humor was evident and he interjected his commentary with it daily.  I learned so much about the history of the era we were studying and not just about ART history.

The other professor, whose name I do not remember, was just as fascinating.  Ancient History was dull and boring, or so I thought.  He brought it to life by talking about the everyday people of the time, the culture, the wars, the food, the floods, and how it all related not only to that time but how it related to the present.

Neither class was dull or boring.  It wasn’t solely focused on specific generals, dates, places, and battles.  History was real and about real, everyday people.

I don’t even know if the schools teach real history any more.  And that’s too bad.

“Those who cannot remember the past are condemned to repeat it.”  George Santayana

Our last day in Gettysburg was shorter than expected as we wanted to avoid the thunderstorms and rain as much as possible on our way home.  We did have our rain suits but they are hot.  And on a hot, muggy day the thought of wearing something waterproof makes one even hotter.

After our delayed breakfast, we packed the Harley, checked out of the hotel, and headed into town to visit the Jennie Wade House Museum.  The Battle of Gettysburg took place in fields, on farms, and in the town.  The fact that  Jennie Wade was the only civilian killed during the three-day battle of  is amazing.

Mary Virginia Wade, “Jennie”, was a 20-year old girl living in Gettysburg with her mother, younger brother and another young boy.  Jennie’s sister Georgia had just given birth and Mrs. Wade was helping her with the infant in Georgia’s house on the south side of town.  When the fighting broke out, Jennie took her brother and the other boy to Georgia’s house as she thought they would be safer there than in the heart of town.

Jennie had been taking bread and water to the Union soldiers near Georgia’s house during the first two days of the battle and she realized that they were running low on bread.  She and her mother were in Georgia’s kitchen getting ready to bake the morning of the third and final day of the battle.  Jennie’s back was to the north facing door and she opened an interior door to shield herself even more.

Mrs. Wade was in the kitchen with Jennie tending the fire.

Georgia was in the living room, which had been converted to a bedroom for the birth, along with her five-day-old baby, younger brother and other boy.

During the battle at least 150 bullets hit the house, some going through windows, some still lodged in the bricks, interior walls, the fireplace mantel (see the bullet hole on the left side of the fireplace surround) and the bedpost. 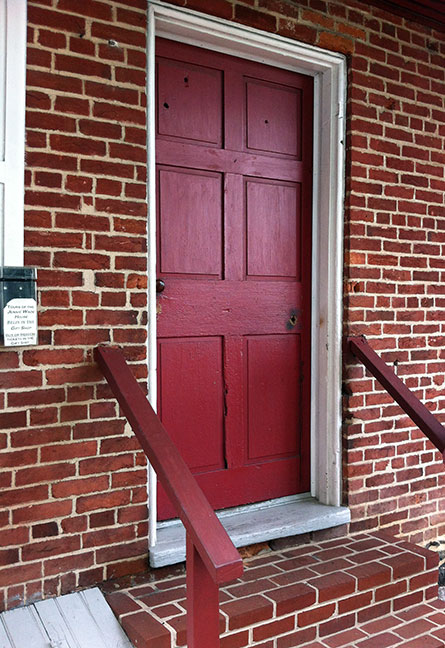 One went through the north facing exterior door…

…and interior door that shielded Jennie.  You can see where she would have been standing behind the door at the dough box on the far left side above. 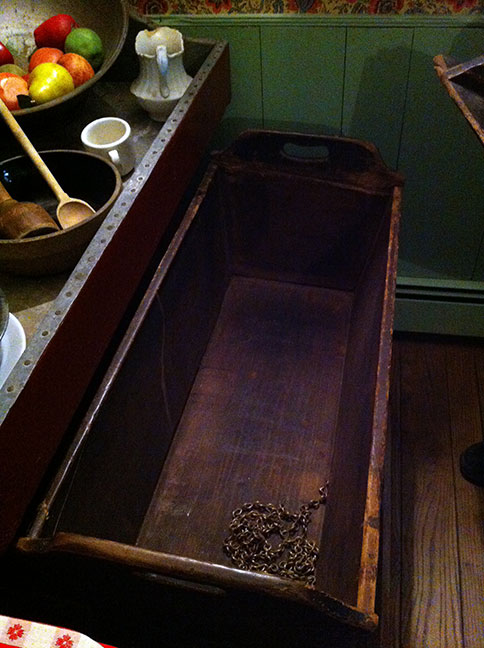 And right into Jennie Wade as she was mixing dough in the dough box. 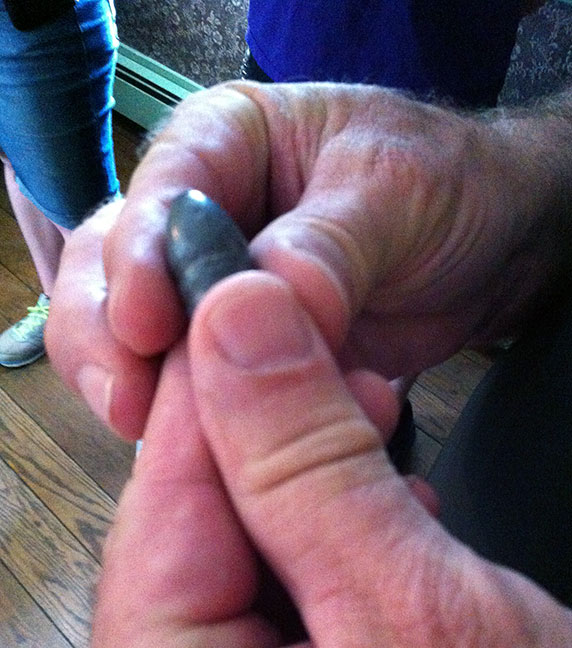 The one ounce lead bullet pierced her back and heart and was found in her corset.   She died instantly.

A 10-pound artillery shell went through the roof, a double brick wall separating the house (Catharine McClain and family lived in the other side) and lodged in the overhang on the south side of the house.  Fortunately the shell did not explode.

Upon hearing the cries inside the house from Georgia and her mother, Union soldiers came into the house and tried to move the family to the cellar.  The only entrance into their side cellar was outside on the north side of the house in full view of the Confederate army. 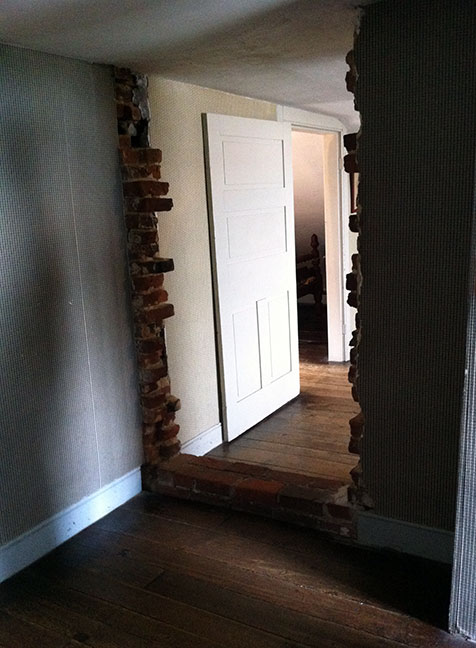 The Union soldiers opened the brick wall that had been damaged by the 10-pound artillery shell on the second floor, moved the family, including Jennie’s body, through the McClain half of the house, and down to the cellar on the north side of the house. 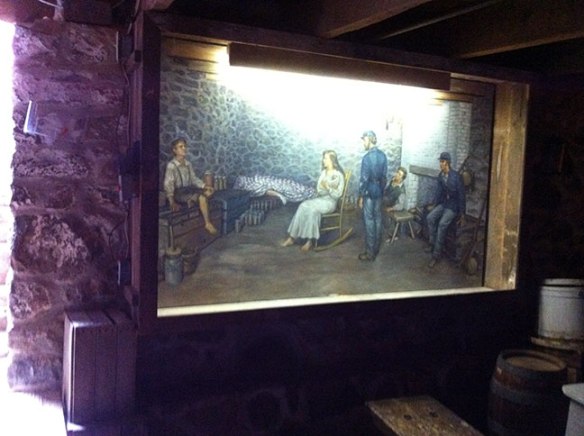 This artist’s rendering was done after the cellar floor was lowered and does not show Mrs. Wade nor the McClain family.

Here you can see where the original floor was and the newer lowered, bricked floor.  There were no windows in the cellar so it was very dark and crowded.

Jennie was buried the next day and later moved two more times.  Her final resting place is in Evergreen Cemetery.

I’ve only touched on a small part of this story.  Listening to our guide and seeing the house and original furnishings was astounding.  It is remarkable that the house and some of the pieces of furniture are so well preserved.

You can find more information here, here, and here.

So many of us have not had to witness fighting, battles, war and are immune to the sufferings of those who have.  I, for one, cannot not imagine, nor do I want to experience any of what these courageous people saw and lived through.

I hope you enjoyed this little history lesson as it is so different from my usual posts.  There were so many other things and places we wanted to see but on such a short trip with such short notice (and hundreds of motorcycles), we saw a lot.  Gettysburg isn’t that far from us so we can go back again and plan our trip in more detail.

These wooden fences line the roads in and around Gettysburg.  Just like in 1863.