Remember my failed, successful, and failed attempts for a tablet/iPad cover?  I have succeeded once again!

I decided to follow the KISS rule.  Keep It Simple, Sweetie.

My inspiration came from something I found on Pinterest:

I love all grey colors and the stripe of bright called to me.  I didn’t want to buy any more yarn for this project so I used what I had.  My red didn’t pop as much as I wanted but I like it anyway.  Plus it fits my iPad.

I started with the flap end on straight needles then switched to circular needles to knit the body in the round.  Actually I wanted it in garter stitch since that was how my successful one was knit so I knit a row then purled a row.  I don’t mind purling though I know some people HATE it!  I dislike seaming more than I dislike purling.  When I got to the bottom, I did a 3-needle bind off.  No seams!! 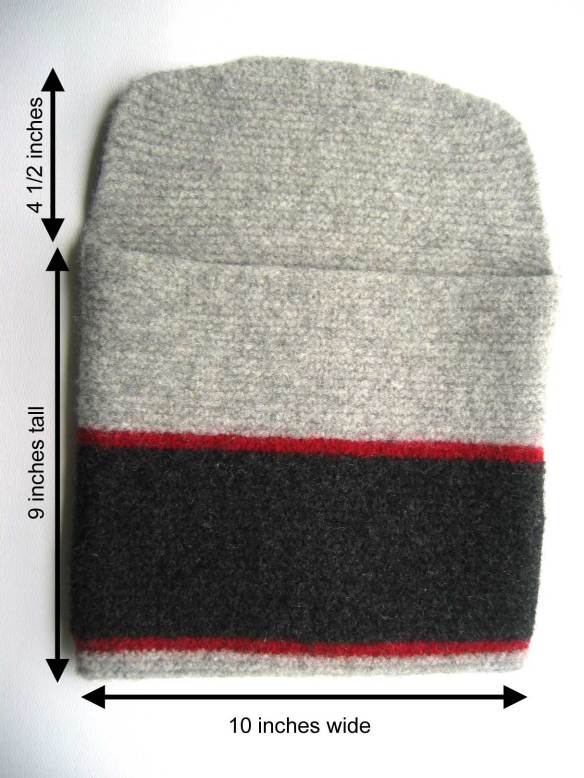 The top flap was pulled and stretched to make it the size I wanted so it is basically the same length before as after.  The cover really is square but the it was at a slight angle when I took the photo so it looks a bit lop-sided.

This could have been felted a bit longer as I can still see the knit rows.  The finished cover is thick and dense.  Maybe it’s the lighter color that shows the rows but I really don’t want to make another one of these (if you know what I mean) since I’ve already made this four times!  Reknitting a failed project isn’t fun.

I haven’t lined this yet and I’m debating on whether or not to add a magnetic snap.  The cover stays closed but I would feel better knowing nothing (like the iPad) would fall out if picked up with the open end down.