I managed to knit at the airport and on the plane on our trip to Vegas though I don’t have too much to show for it. 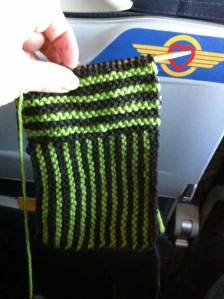 I started another Garter Stitch bag in Cascade 220 Primavera and Jet.  I was in the middle seat on the plane and had a hard time getting comfortable.  Turns out that Mr. Aitch is an armrest hog and encroached into my space.  I think the man to my left thought I was crazy for taking a picture of my knitting.

I did get a window seat on the return trip and managed to get three and a half squares done before I ran out of the green yarn.  I was using a partial ball and didn’t get another one wound into a ball before we left.  An airplane just isn’t the place to wind a skein of yarn into a ball…at least that’s what Mr. Aitch says.

I wanted to look out the window as much as I could which was easy to do while knitting mindless garter stitch.  I don’t get to see the world from 45,000 feet very often.

Aren’t those patchwork fields so artistic?

When there was too much cloud cover, I started the Linen Stitch Scarflet. 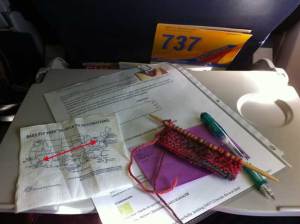 I only got about eight rows done on this since the stitch pattern required more concentration.

We got a non-stop return flight so I folded my napkin in fourths to give me an idea where we were in our flight.  This section of the scarflet was knit somewhere over Indiana.

Mr. Aitch’s armrest hoggishness didn’t affect my knitting on the return trip.  I evidently need more space on my right side than left when knitting and since the window was to my right, I had a little bit more space.