I asked Mr. OCD to help me with an office chair I recovered. 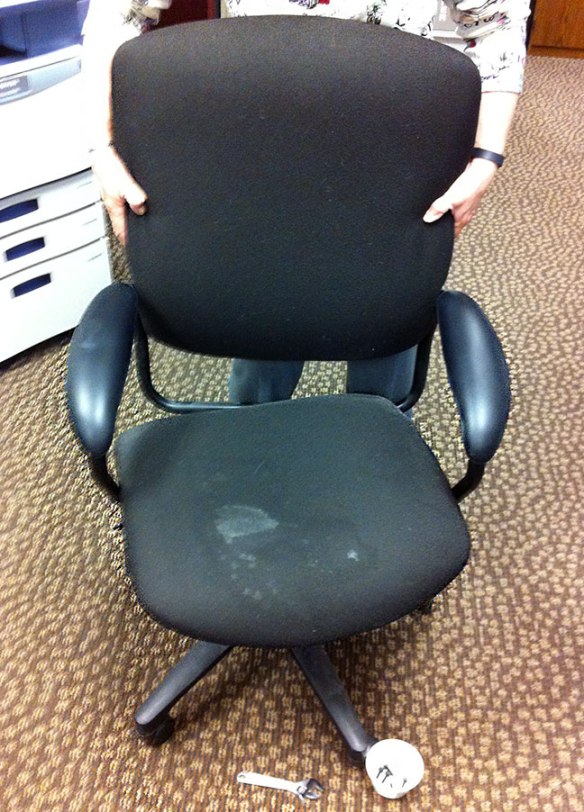 Yeah.  It looks disgusting.  Someone (not me) spilled coffee on the seat and the stain never came out.

It belongs to the receptionist even though we don’t have a receptionist. Glad we got that cleared up.

Anyway, I found some great upholstery fabric on clearance at Joann Fabrics and decided to take on this project.

I started taking the chair apart but one of the other guys in the office thought he should get in on the act and helped.  Whatever.  It’s a man thing.

The original cover from the chair had this cool binding with a cord running through it which was sewn around the edge.  When the cord was pulled, the fabric cinched up around the frame so fewer staples were needed.

I took the old fabric from the seat and chair back home to use as a pattern for the new cover. I ripped off the binding stuff as it was still good and sewed it on the new fabric to make it easier to fit the frame when I got to that part.  It was a tight fit for sure.  There didn’t seem to be a lot of extra fabric to wrap around the chair back so Mr. OCD and I pulled and pulled and pulled.  And stapled where we thought it needed it.  Only I had the wrong staples for my staple gun.

Mr. OCD said it wasn’t worth it and was ready to chuck the chair into the dumpster.  I wasn’t giving up.

To humor me Mr. OCD brought his staple gun and staples in when he came back from lunch.

I was determined to get this chair recovered.  After more pulling and stapling and hammering and tugging, we finally got the new cover secured and the back panel on.  It didn’t look good.  Some of the staples were showing and I wasn’t satisfied.  Mr. OCD was because that part was done.

But I jumped the gun.  I realized that we had to reattach the arms before we put the back panel on.  Mr. OCD was ready to pitch the chair again.  We wrestled the back panel off and I pulled out the offending staples because they really bothered me.  It just wasn’t right.

I had two pairs of pliers to help grasp the fabric as I tugged as tightly as I could and told Mr. OCD to staple farther into the chair so the staples wouldn’t show this time.  We got the arms bolted on and put the back panel on.  This time all the staples were hidden.

It wasn’t perfect but it was right enough.

The seat cover was a piece of cake.  I got the cover on and he and I both pulled the cord to cinch up the fabric over the chair seat frame.  I had to wiggle and scooch and maneuver the fabric to try to match the pattern from the upper part to the seat as best I could.   Mr. OCD stapled the fabric and cord to the bottom of the seat.

We reattached the base and admired our handiwork.

But not for very long.

The assistant director liked the chair so much more than the one he was using so he procured it for himself.

The chair wasn’t perfect but it was right enough.  And worth doing.

5 thoughts on “OCD vs. Perfectionism Part 2”